The year is 1961, just as the struggle for desegregation is gaining steam. Seventy-year-old Cosimo Infante Cano, a Cuban-born artist in need of inspiration, follows his lover to Texas in what is to be a temporary sabbatical from their life in France. Unexpectedly, he finds himself …

In 1937, Willa Brown earned a commercial pilot’s license in Chicago. She and her husband, Cornelius Coffey, organized a fully accredited flying school providing flight instruction for men and women, black and white.

…and the earth did not swallow him

The film is an adaptation of the prize-winning novel . . .
y no se lo trago la tierra
by Tomas Rivera. Set in 1952, and seen through the eyes of Marcos, a twelve-year-old boy, the story follows a family’s migrant journey through a year in their lives.

2022 marks the 40th anniversary of the premiere of Soldierboy at El Teatro Campesino, directed
by Luis Valdez. The authors have a different vision how they would envision the play today. 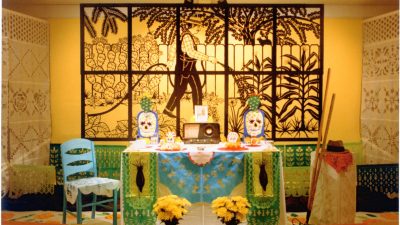 Carmen Lomas Garza’s work taps into a distinctive vision of her childhood in Kingsville, Texas, during the late 1950s. Her paintings and etchings recall celebrations, rites of passage, and intimate family moments.

Countdown: Reflections on a life in Dance (Rudy Perez)

For over forty years Rudy Perez has moved, invigorated and perplexed audiences. The documentary follows the fascinating give-and-take of the rehearsal of one of Rudy Perez’ signature dances, Countdown.

This is a story Twain swears is true—unless it isn’t.

A delightful short film about the history of calligraphy.

SYNOPSIS: [ Film Score]
In 1993, Marcos Loya composed the musical score for the award-winning film …and the earth did not swallow him. Written and directed by Severo Perez, the film is an adaption of Tomas Rivera’s seminal novel, y no se lo trago la tierra.

…And the Earth Did Not Swallow Him

SYNOPSIS: [ Feature Film ]
A moving and powerful portrait of the life of a poor Mexican American boy and his migrant farm worker family as they struggle to adjust to life in American society. Adapted from the novel (…y no se lo tragó la tierra) written by Tomás Rivera and published in 1971, the film is a feature-length drama produced for AMERICAN PLAYHOUSE, PBS’s weekly drama series. The film presented for the first time in theaters and on American television, the perspective of migrant workers as told by one of their own. The author, Tomas Rivera, was himself a migrant worker as a child, and later went on to become the highest ranking Mexican American in higher education as the Chancellor of the University of California, Riverside. Told through the eyes of Marcos, a twelve-year-old boy, the film emphasizes Marcos’ desire to educate himself. Through its many human stories of growing up as a Mexican American, the story exposes the rich cultural traditions which have given shape to life in the American Southwest.

SYNOPSIS: [ Short Film ]
Memorable characters and clever figures dance across the screen in this fluid presentation about the evolution of language and writing. Poetically narrated by Brock Peters and engagingly animated, the film is as instructive as it is entertaining. As the development of language unfolds, the film commands an appreciation for the power of communication and the historical contributions of many cultures to the growth of language, and to the timeless beauty, humor and eloquence of the written and spoken word.

SYNOPSIS: [ Short Film ]
Carmen Lomas Garza’s work taps into a distinctive vision of her childhood in Kingsville, Texas, during the late 1950s. Her paintings and etchings recall celebrations, rites of passage, and intimate family moments. She has transformed the ephemeral papel picadoof memory into a large copper tableau depicting her grandfather watering his garden, surrounded by hummingbirds, lizards and the family cat. While her children’s books have touched millions, Carmen’s paintings speak to all generations.

Countdown: Reflections on a life in Dance (Rudy Perez)

SYNOPSIS: [ Feature Film ]
For over forty years Rudy Perez has moved, invigorated and perplexed audiences. During the early 1960s, he was hailed as a post-modern pioneer as a founding member of the groundbreaking Judson Dance Theater in New York City. Today he lives in Los Angeles and defies definition while continuing to create provocative new work. The documentary follows the fascinating give-and-take of the rehearsal of one of Rudy Perez’ signature dances, Countdown.

SYNOPSIS: [ Short Film ]
La Raza Unida Party started in Crystal City, Texas in response to historic injustices common throughout South Texas. Even though U.S.-born Mexican-Americans represented 90% of the town’s population, they did not hold public office, or have the opportunity to serve in the police or fire department. They were not even allowed to run for cheerleader or student office at the local high school. When the first generation of Chicano college graduates returned home to Crystal City, they challenged the local power structure. In one election Mexican American voters swept the entire city government from office, changing politics permanently in the region.

SYNOPSIS: [ Short Film ]
A young wet-behind-the-ears reporter interrupts Mark Twain and his niece who are engaged in a quiet game of billiards. The young man is there to interview the famous author about his life and work. Before too long, the always wry Twain has the poor reporter confused, not knowing what is up, down, true or false. Twain then relates the story of Jim Smiley, “the bettin’est man who owned the jumpin’est frog in all of Calaveras County.” This is a story Twain swears is true—unless it isn’t.

SYNOPSIS: [ Short Film ]
In the small town of Ocotlan, in the state of Oaxaca, Mexico, the Garcia-Aguilar family produces Monitos, clay folk art figures, to supplement their income from farming. The film follows the making of the figures while showing the family’s daily life. The children play and work: the older children take care of the younger children, wash clothes with their mother and help their father farm. By the end of the week, the Monitos are ready to sell.

SYNOPSIS: [ Book – Historical Fiction]
The year is 1961, just as the struggle for desegregation is gaining steam. Seventy-year-old Cosimo Infante Cano, a Cuban-born artist in need of inspiration, follows his lover to Texas in what is to be a temporary sabbatical from their life in France. Unexpectedly, he finds himself stranded in San Antonio, nearly penniless, with little more than the clothes on his back and an extraordinary pocket watch. His dark skin, shoulder-length hair, and eccentric attire make him an odd sight in what he has been told is a conservative cultural backwater.

The characters, a motley group of student friends, librarians, cafe owners, shopkeepers, laborers, and bank tellers, feel empathy for his impoverished condition, but his unconventional actions and uncompromising ethics often confuse or frustrate them. He creates charming drawings he refuses to sell, rescues a local eatery about to go under, and renovates his rented cabin simply for the pleasure of making a difference. In the process he forever alters the lives of those that thought they were helping him. The ending is unexpected, moving, and satisfying.

SYNOPSIS: [ Short Film ]
Juan and Maria Adela Barrientos, a Mexican-American couple, tell how they came from Mexico to San Antonio, Texas, with their two young children and earn their livelihood by making and selling piñatas, a family tradition.

SYNOPSIS: [ Short Film – Documentary]
In 1937, Willa Brown earned a commercial pilot’s license in Chicago. She and her husband, Cornelius Coffey, organized a fully accredited flying school providing flight instruction for men and women, black and white. Willa was the organizing force in the creation of the National Airmen’s Association, whose mission was to lobby Congress for the integration of the Army Air Corps. Her efforts were directly responsible for the creation of the renowned Tuskegee Airmen, which led to the integration of the US military services in 1948. This documentary tells the story of early black aviation and the extraordinary individuals who shaped this part of civil rights history.

SYNOPSIS: [ Book – Historical Fiction]
When one thinks about America’s aviation heroes, the Wright brothers, Charles Lindbergh and Amelia Earhart come to mind. Lesser known are Cornelius C. Coffey, John C. Robinson and Willa B. Brown, real-life African-American historical figures who revolutionized aviation from the late 1920s through World War II. Brown was a schoolteacher in Gary, Ind., with a mind for machines, while Robinson and Coffey were working as well-regarded but underpaid auto mechanics. All had a desire to fly, and their paths crossed at a Walgreens drug store, when Willa, working temporarily as a waitress and cashier, overheard the two young men talking about a plane they had built. They insisted that she come see it, and the rest is history. Coffey and Robinson studied for and obtained pilot’s licenses (despite a stated “no colored” student policy), becoming the first black men in the United States to do so.

SYNOPSIS: [ Short Film – Documentary]
The written alphabet has evolved from ancient quill calligraphy to modern cursive handwriting. The film relates how historical events, the printing press and mass-produced pen points determined the shape of the letters. Stunning illuminated manuscripts and medieval drawings come alive, as the incomparable voice of John Houseman describes the development of printing and how human attempts to write quickly led to the cursive script we use today.